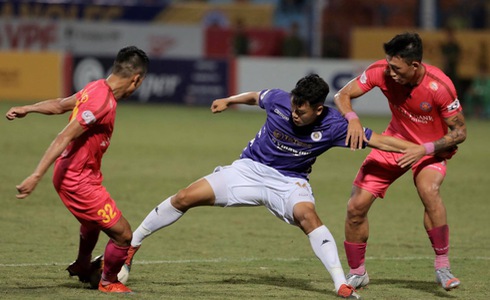 A Hanoi FC player fights for the ball between two Saigon FC opponents during their game in the 7th round of the 2020 V-League 1 at Hang Day Stadium in Hanoi, June 30, 2020. Photo: Tuoi Tre

Saigon FC defeated Hanoi FC in an away match at the 2020 V-League 1 on Tuesday night, climbing to the second place of the standings.

The hosts preferred offense and dominated in the early minutes of the Round 7 game at Hang Day Stadium in the Vietnamese capital.

They missed a golden chance just 15 minutes into the game, with skipper Van Quyet hitting the ball over the bar from three meters following a cross by Jamaican forward Rimario Gordon.

Hanoi kept attacking to no avail as the visitors built a strong defense wall in a bid to snatch a point from the defending champions.

Failing to find a goal, the hosts paid a price in the second half.

Saigon’s Brazilian attacking midfielder Geovane Magno raced into the box and his left-footed shot found the net of goalie Nguyen Van Cong in the 48th minute.

Hanoi missed another chance ten minutes later after Gordon was fouled in the penalty area.

Van Quyet stepped forward and shot the ball into the sky from the spot.

Saigon managed to defend their 1-0 win till the final whistle despite relentless efforts to equalize by the Capital Team.

Ho Chi Minh City FC are on top of the table with 14 points.

The winners of the 2020 season will qualify for the AFC Champions League group stage while the 14th-placed club, currently Quang Nam FC, will be relegated to the second-tier V-League 2.

The V-League 1 was postponed on March 15 after its first two rounds had been played behind closed doors on account of COVID-19.

It was resumed on June 5, with supporters allowed to enter stadiums to cheer for their clubs after Vietnam has kept the coronavirus at bay.